Ranpak’s ownership culture leads many employees to make a career within the organization. One example can be found in Erwin Methorst, Manager of Packaging Engineering at our EMEA headquarters. Erwin began his career at Ranpak in 1997 with what he initially thought would be just another job. Since that time, he has grown to be a fixture of the company, featured in numerous product demonstrations and videos as well as leading trainings with new recruits on the history of Ranpak. However, the story of his career begins before he had ever heard of Ranpak, taking him on a journey that has led him all over the world including many unexpected directions. 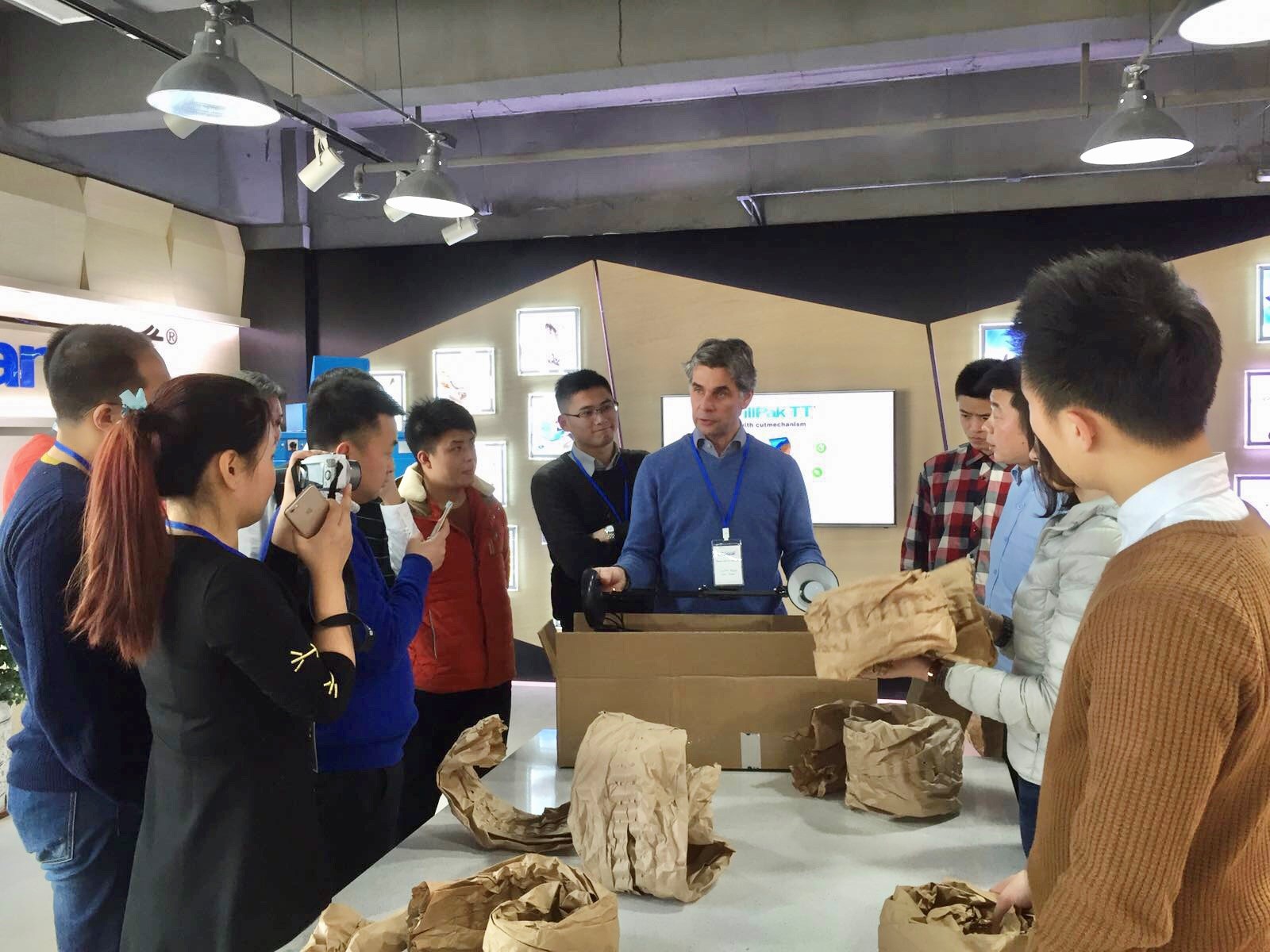 From Curaçao to Heerlen.

By his own admission, Erwin took a circuitous route towards his degree. “I was a late student,” he says. “I did not know what direction to go and had a lot of interests other than school.” One of those interests was surfing, which is why when a friend returning from the military showed off pictures of the crystal blue waters of Curaçao in the Dutch Caribbean, he made a choice. “Back then, military service was mandatory, so I decided to apply for the Marines before continuing with college. I was pretty sure that during that period I would become more serious, and I knew that many marines were stationed in Curaçao where I could continue surfing.”

Released from the military and newly imbued with a sense of direction, Erwin resumed his education. At college, he developed a passion for architecture, partly inspired by befriending a successful interior designer responsible for some of the more well-known and high-end hotels in the Netherlands. That prompted him to pursue a degree in Industrial Design. While initially focusing on architectural design, Erwin was inspired to shift focus. “During college, I had the opportunity to specialize in Packaging Development. I noticed that not many other students made that choice. It made me think that it could be a great opportunity to differentiate myself from my peers.”

After school, his first job was a freelance project working for a motor oil company redesigning their retail packaging. When that project concluded he found himself drawn into another relocation. “Love brought me to the south of the Netherlands where Ranpak is located, which was never somewhere I had considered living before, having always been close to the coastline and the ocean.” After moving, Erwin didn’t so much as find a job, as it found him. His hunch that packaging engineering would bring him opportunity was correct. “A recruiting agency brought me in contact with Ranpak. I had never heard of them. I remember that our managing director during that time tried to explain to me how well crumpled paper could cushion products. Although I gave him the impression that he had convinced me and accepted the job, I still had my doubts.”

Discovering a passion for paper.

While his initial impression was disbelief, Erwin soon came to realize that everything he had been told about paper’s packaging applications was true. “When I first came to Ranpak, I was struck by the feeling that everyone was invested in what they were doing and really believed in what paper could do. While I loved the energy of the office, I was skeptical.” It ultimately took seeing live demonstrations of drop-tests and packaging techniques for Erwin to realize just how special the properties of paper can be, something that he now loves to recreate for others.

Even after decades of experience, the versatility of paper can still surprise. “I remember even just 4 years ago, when I was with a customer and I couldn’t believe my eyes. They were using paper to pack pumps which weighed 300 kilograms, or around 600 pounds.” For Erwin, it’s these types of experience that have led him to stay at Ranpak for close to 25 years. “I’ve seen every application for paper in my time here, and the best is that I have seen them in use in their actual environments with our customers.” 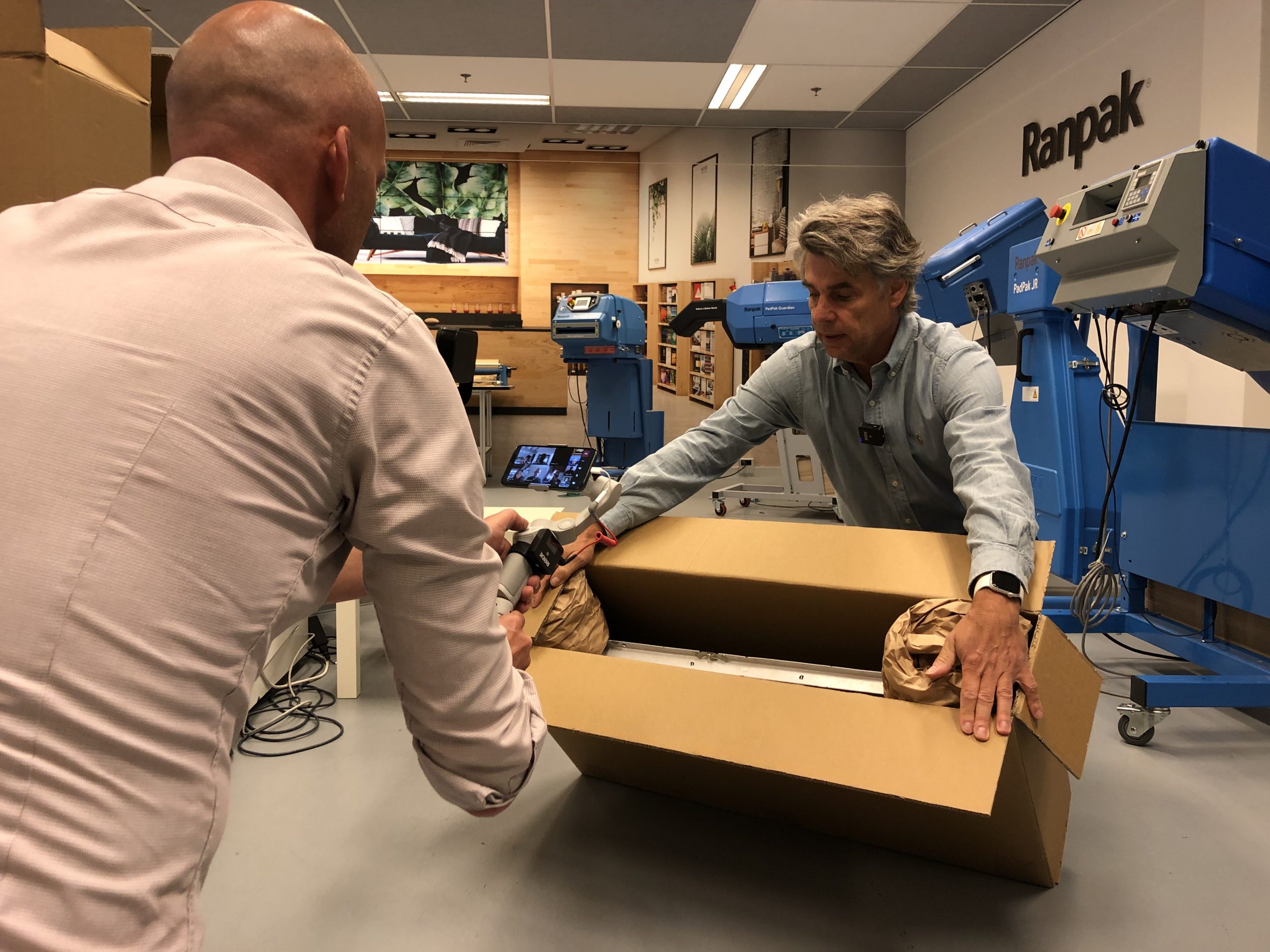 Today, Erwin’s experience has given him confidence that he can change people’s perceptions around paper packaging, just as his own was changed years ago. “The most fun part of my job is when I get to go on site and educate our customers about what they can do with paper. When I started, I used to worry about people who were negative. Now, I prefer visiting customers who are like this, because it’s an even better feeling knowing that you changed their minds.”

A new experience every day.

Erwin was the first packaging engineer hired by Ranpak in Europe and found himself corresponding closely with his peers in the United States, collaborating to develop better packaging strategies. During this time, he began to work closely with sales because of a talent for demonstrating packaging techniques. “I never thought that I would travel so much in my life,” he shares. “I’ve been to Australia five times, Japan eight times, and even to places I never expected to go like Brazil and Dubai. It’s given me the opportunity to experience cultures and other ways of life, including how people do business, which you don’t get to see as a tourist. For example, in Italy, I learned that no matter what company you’re visiting, when your meetings conclude, people will go for an espresso. I got to try some very nice quality coffee.” 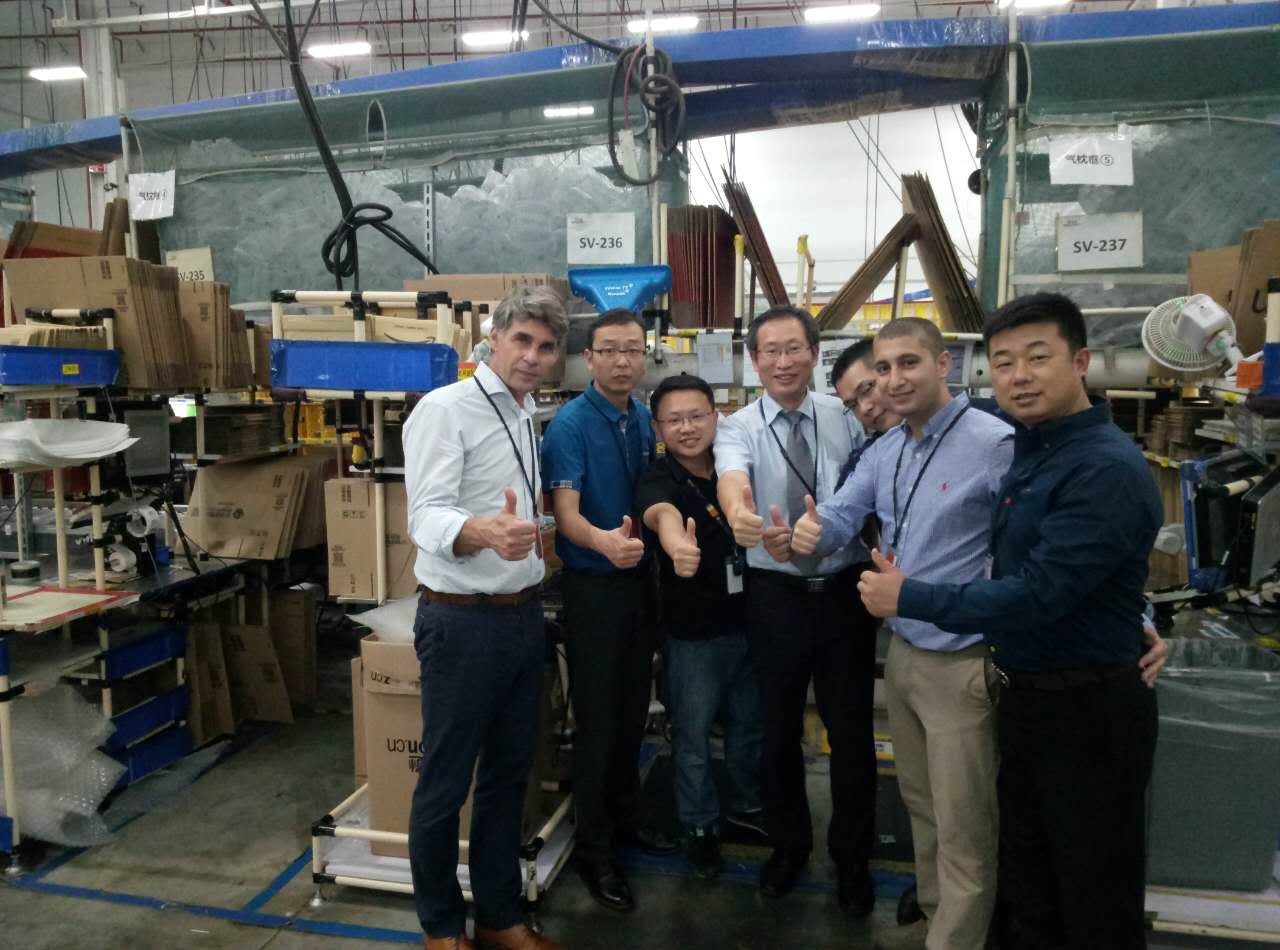 A large part of Erwin’s expertise comes from having seen first-hand the innovations that have taken place within Ranpak over the years. In the early 90’s, PadPak® paper was Ranpak’s only product, used for applications including cushioning, blocking, bracing, wrapping, and void fill. After the development of plastic air bags, it became clear that using PadPak® as a void fill material was no longer competitive on price. A new solution was needed. “The first FillPak® machines we developed used big rolls of paper, which made them difficult to handle. The US team was thinking of creating an accordion folded block of paper to help the paper go faster and fit more onto a skid, but it didn’t work because we were using multi-ply paper at the time. We developed a single-ply system, which enabled the paper to completely fill a skid and move extremely quickly to compete with plastic-air bags on speed and price. Suddenly, we had more than one system, and that expansion has continued ever since.”

Often, packaging techniques themselves can lead to technology innovations. The PadPak® Auto-Coiler was developed to meet specific requirements for cushioning a Porsche engine. Erwin remembers, “we were shipped a spare engine from a Porsche Boxster and tasked with replacing the foam packaging. It arrived in a huge box at our workshop, full of a large amount of foam. We designed packaging for it using spirals of our material and shipped it back to Porsche. Since they liked it, I was rewarded with a weekend in a rented Porsche, driving around. However, they came back to us asking for a faster method of creating paper coils which they were then doing by hand. This is when we created the first prototypes for the coiler, and they were the first customer to use them.” 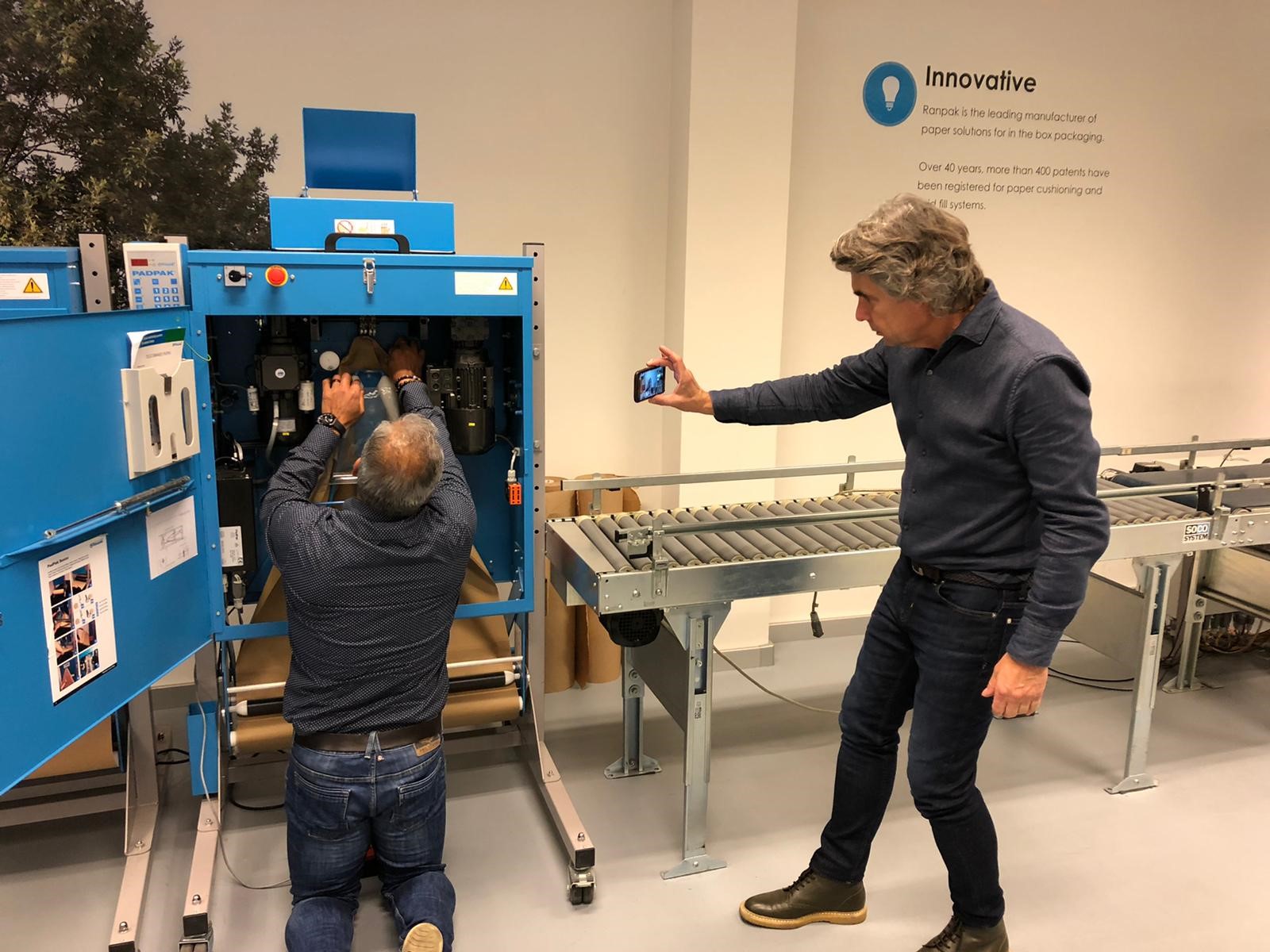 As for his time when not on the job? Erwin’s passion for architecture is still alive and well. With a smile, he speaks about his current project. “About three years ago I bought another house in a great location that has a lot of potential. I’ve been able to slowly work on it and it’s a unique design that’s not like a typical home. I’m enjoying the process very much. It allows me to continue to think creatively.”